Harold Pinter’s “Betrayal,” arguably his most accessible play, can be read one of two ways: as a cleverly constructed dissection of a clandestine love affair and all the levels of betrayal that come with it, or as an indulgent autobiographical work by a self-obsessed writer.

There’s no rule that says it can’t be both, of course. This play spans nine years and allows us to see the exuberant beginning and sad end of a seven-year love affair between a literary agent and his best friend’s wife. Based in part on Pinter’s own affair with television presenter Joan Bakewell while he was married to actress Vivien Merchant, he lays out the major events in “Betrayal” in reverse chronology. 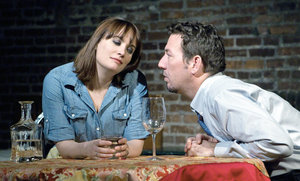 Thus, in the opening scene we see the final, bittersweet meeting between Jerry and Emma two years after their affair ended. In the final scene we see its passionate beginning.

There’s no denying that Pinter’s tight, economical dialogue draws us in. And his knack for conveying information about his characters as much by what they don’t say as what they do is compelling. In a strange way, “Betrayal” is put together like a thriller — although it doesn’t deliver much in the way of thrills.

The production at the Living Room, directed by Bryan Moses and featuring a talented cast, finds clever ways to distract us from the play’s fundamental emptiness. The love triangle presented in this play is remarkably cold and joyless, and how we feel about it all when it’s over seems curiously beside the point.

Moses has chosen to take advantage of the Living Room’s flexible and cavernous performance space to present the play in “promenade style,” meaning the audience follows the actors from room to room as they perform the show. The earliest scenes — set in a pub and a living room — are set downstairs, but most of the play is performed in the big second-floor loft where we see another living room scene as well as episodes in a Venice hotel room, a London restaurant and the flat where Emma and Jerry carry on their affair.

At the Monday night opening, the audience was literally left in the dark at times during the scene transitions and was unsure just where the next scene would be played, but in each case guides were on hand to direct viewers to the proper location.

Forrest Attaway dominates the production with a finely crafted, nuanced performance as Jerry. There are moments of potent humor in his deadpan reactions to an increasingly tense and soul-battering situation. Few actors can do as much as Attaway while saying nothing, and when he speaks, every word counts. Indeed, Attaway gives the piece some actual emotional resonance. In the final scene, when we see a drunken Jerry professing his passion for the surprised Emma, the poignancy is palpable because we’ve already seen the train wreck.

Katie Gilchrist brings her customary charisma to the stage as Emma, ably negotiating transitions between love, passion and, ultimately, an emotional void. And Rick Williamson, an actor I’d never seen before, delivers an impressive less-is-more performance as Robert, Emma’s husband. His work is subtle and controlled.

Williamson is particularly good when enunciating the script’s understated but withering commentary on the London writing and publishing scene, circa the 1970s.

The play has valid things to say about the different manifestations of betrayal — how each character emotionally betrays the others and how both Robert, who is a book publisher, and Jerry betray their own literary ideals.

But ultimately this play seems straitjacketed by the era it evokes. It invites us into the prop wash of London’s “swinging ’60s,” which in retrospect isn’t terribly interesting.