Two very different one-actor plays inaugurated the “British Invasion 2011” at the Metropolitan Ensemble Theatre, bringing a most welcome touch of class and smarts to midtown.

Rebecca Vaughan’s “I, Elizabeth,” directed by Guy Masterson, is a dense, textured and compelling, if contradictory, portrait of a young queen seeking to balance her fierce personal independence against the demands of domestic politics, foreign policy and potential threats from Spain and France. All the words are Elizabeth’s, and the show effectively puts the audience in the role of confidant as the queen shares her unvarnished opinions, ardent hopes and deepest fears. 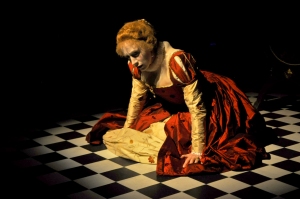 Richard Fry’s “The Ballad of the Unbeatable Hearts” is a clever, amusing and profoundly serious examination of the causes and consequences of gay teen suicides, performed in rhyming verse with a light but heartfelt touch. Fry’s script takes the audience on a touching journey that makes unexpected turns as it juxtaposes upbeat, whimsical projections of the world that could be against the rather grim, unforgiving place that it is.

The MET is the physical host, but the Brit invasion is produced by Central Standard Theatre, a company closely associated with the MET. CST is working with theater troupes in the U.K. and Australia to set up a permanent exchange program that will allow annual performances in Kansas City by artists from both countries.

Vaughan composed her script entirely from extant writings by Queen Elizabeth I, including speeches, prayers, notebook jottings, even acerbic comments scrawled in the margins of legislative documents. In the course of the play we hear Elizabeth rebel against the Parliament’s insistence that she marry and produce a clear-cut heir to the throne. We hear her personal feelings about marriage; the problems posed by Mary, Queen of Scots; and, at times, feelings of helplessness so overwhelming that she prays to the Almighty to guide her.

Vaughan performs the Elizabethan language in a conversational style, which places us in an inherently intimate relationship with the character. We may miss the significance of some of the arcane subject matter, but there’s no mistaking how Elizabeth feels about it.

Ultimately, Vaughan may cover a bit too much history in her 70 minutes of stage time. And the sound of an electrical short accompanied by dimming lights to separate individual episodes seems arbitrary and “post-modern” and does nothing to enhance the material. Even so, Vaughan performs with integrity and deep emotional honesty. 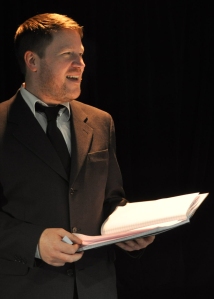 Fry relates the story of a teenager whose parents gave him the comically incongruous name of John Wayne, who at the age of 14 steps in front of a bus with a suicide note in his inside pocket. Through therapy sessions with a sympathetic nurse, he begins to feel OK about being gay. He goes on to distinguish himself by climbing Mount Kilimanjaro, forming a national group of positive-thinking activists who spread the it’s-OK-to-be-gay gospel and eventually, in old age, riding on the first commercial orbital space flight.

If all that sounds too good to be true, you’re right. Fry shows us what could be as a way of underscoring what is. He’s as talented a writer as he is an actor, and his moving performance easily wins over an audience.

Kansas City is, of course, famous for audiences who award standing ovations to performers simply for coming from somewhere else. Indeed, the audience Thursday night stood for both Vaughan and Fry, but in this case it seemed a justifiable reward for the difficulty and quality of the performances.