Gregory Harrison never gets tired of trying something new.

So here he is, in Kansas City — well, Overland Park if you want to get technical about it — making his first appearance at the New Theatre and performing a show he’s never done before: “Pump Boys and Dinettes.”

The off-Broadway musical that became a Broadway hit in 1982 and has enjoyed a long life in regional theaters ever since had a special allure for Harrison. For one thing, he’s playing guitar for the first time in 25 years.

“The theater here introduced the idea,” Harrison said during a lunch break one recent afternoon. “It’s not the kind of thing I would generally be offered or cast in, so it appealed to me on that level. I normally play CEOs and doctors and presidents, so the idea of playing a gas station attendant immediately appealed to me.” 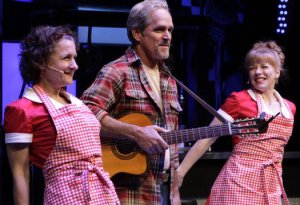 The show revolves around four guys who work in a gas station and two waitresses in the Double Cupp Diner somewhere in North Carolina. The show was written by the people who first performed it, and most of the music comes out of pop music and county rock traditions.

Harrison has enjoyed a long career on stage and screen. He’s remembered for his performance as Dr. George Alonzo “Gonzo” Gates on television’s “Trapper John, M.D.,” which ran from 1979 to 1986, but he’s also produced his own films, run his own theater in Los Angeles and appeared on Broadway in Kander and Ebb’s “Steel Pier” and the long-running revival of “Chicago,” as well as Stephen Sondheim’s “Follies.”

Harrison has gray hair, but he’s a fit-looking baby boomer, emanating the bronze aura of a California native who grew up swimming and surfing.

He was born in Avalon, on Catalina Island, off the coast of Los Angeles. He was a third-generation islander. It was a small community — there were 31 kids in his high school graduating class and he had gone to kindergarten with 28 of them — but it was a popular movie location.

And he does carry some vivid memories of his father’s boat being used for a romantic comedy called “The Glass Bottom Boat” with Rod Taylor and Doris Day.

Harrison never went to college but served in the Army as a conscientious objector for three years. Two of those years he was a helicopter medic in Germany and, because of his C.O. classification, never was assigned to serve in Vietnam, although some conscientious objectors were. After the Army he decided to study acting in Los Angeles on the GI Bill.

Most show business careers have humble origins, and Harrison’s was no exception. In 1974 he was cast in a film called “Jim, the World’s Greatest.” According to Harrison, it was made by two 18-year-olds for $100,000 their parents had given them, and they needed a non-union actor.

Harrison wasn’t getting paid, but eventually the movie was picked up by Universal Pictures, where executives thought the quality was so poor that parts of the film had to be reshot. Harrison said he earned a little money from Universal because of the reshoots.

“It got released, opened and closed in about 10 days,” he said. “But it got me in the union; it got me a rave review by Charles Champlin in the L.A. Times. An agent saw (the review) and called me. So here I was: I was a movie star and still had about $100 in the bank.”

But it wasn’t long until Harrison landed a regular role on the sci-fi series “Logan’s Run.” He’s kept working ever since. He started his own production company and produced about 20 movies, and he bought a theater where, “I taught myself to act on stage.”

“Trapper John,” was technically a “M*A*S*H” spinoff. Pernell Roberts played the middle-aged version of the character played by Wayne Rogers in the first three seasons of the TV series and Elliott Gould in the Robert Altman film. Beyond that, there was virtually no relationship between the two shows.

“ ‘M*A*S*H’ was still on, still a big hit, and they found a way to sell a show idea by taking a character from ‘M*A*S*H,’ updating him to the present, turning it from a half-hour comedy to an hour light drama, and the only real connection to ‘M*A*S*H’ was that one character. So it was probably a way to sell it to the affiliates. I often thought if it wasn’t named ‘Trapper John, M.D.’ it might have had more credibility as its own entity, its own personality and its own rewards.”

Roberts had become famous as one of the Cartwright brothers — sons of the ranching patriarch played by Lorne Greene — on the Western series “Bonanza,” but after several seasons decided to leave the show. Harrison once asked him why he left, and Roberts told him: “There’s an actor nine years older than me and I’m calling him Pa.”

“Pernell was a wonderfully talented man,” Harrison said. “He had a lot of demons, but when he wasn’t fighting them, he was one of the most charming men I had even known. Incredibly bright. Things didn’t work out the way he had hoped they would, and he had to deal with that on some days. … He was sure he would have a good film career and stage career. But he wasn’t cut out for compromise, and network television then required lots of compromise.

“I think what he wanted was to flaunt his independent streak. He wanted everyone to know he was nobody’s fool and nobody’s pawn and he would make up his own mind about how to present himself and how to play a scene. I loved him and embraced him, good and bad, hard and soft.”

Harrison just finished a film for the eccentric director Henry Jaglom with Michael Imperioli and Tanna Frederick. Called “The M Word,” it was largely improvised at Jaglom’s insistence. It’s all part of the actor’s life, according to Harrison. One thing he doesn’t want to do is repeat himself.

“I’m here for a couple of months doing something really different in a city I’m not familiar with,” he said. “I think the reason I became an actor in the first place, aside from the fact that it’s magical, is that it appeared to be something that would never be boring. Different faces, different places, different voices, different characters to play. All that appeals to me. Because I’m never bored.

“I think I fear boredom the way most people fear death.”

Read the review at kansascity.com.