You know the drill: Folkies write the protest songs. They sing the labor songs. They sing about injustice, racism, greed and destruction of the environment. They join hands and sing “Kumbaya” and “We Shall Overcome.”

In fact, the 2017 Folk Music International Conference adopted protest as a theme. But this year the organization celebrates 30 years of existence. And according to FAI executive director Aengus Finnan, the fundamental purpose remains the same: For musicians to experience a sense of solidarity and community. The conference goals, he wrote in his welcome letter, is not fundamentally different from the very first gathering three decades ago in Malibu.

“We must also collectively acknowledge and address the chronic issues of harassment and discrimination that continue to plague the music industry, of which folk music is no exception,” Finnan wrote. “We can do better in all regards, but it requires dialogue and commitment . . . Let’s not just be leaders, but let’s do what is right as we set course for the next 30 years.”

This year the political vibes were palpable. As Finnan said, a sense of community coalesces at the annual gathering, and that’s a good thing for musicians who spend a big part of their lives on the road for modest financial rewards. The conference always feels a bit like a family reunion. And at a time when a lot of politicians are working overtime to divide people, community matters.

As usual, the coming together of the tribes attracted musicians from across the U.S. as well as Ireland, Britain, Australia and Canada.  Bands from Sweden and Norway were on hand. So was an Italian guitarist and another from Holland. A vocal group from Zimbabwe attended. While it was possible to hear actual folk songs, the music spanned a wide spectrum, from rock to hip-hop to “progressive” bluegrass.

Next year the conference moves to Montreal but will return to KC in 2021. Where it will be in 2020 has not been announced.

The 2018 conference spanned four days (Feb. 13-17) at the Westin Kansas City at Crown Center. Musicians filled the hotel lobby with spontaneous jam sessions day and night. Private showcases ran on tight schedules in the afternoons and wee hours on three floors upstairs, while prime-time hours were devoted to “official” showcases in the downstairs ballrooms as well as Benton’s (the former steakhouse) and a new venue this year — the terrace level with the big rock formation and bubbling water an escalator ride up from the lobby. 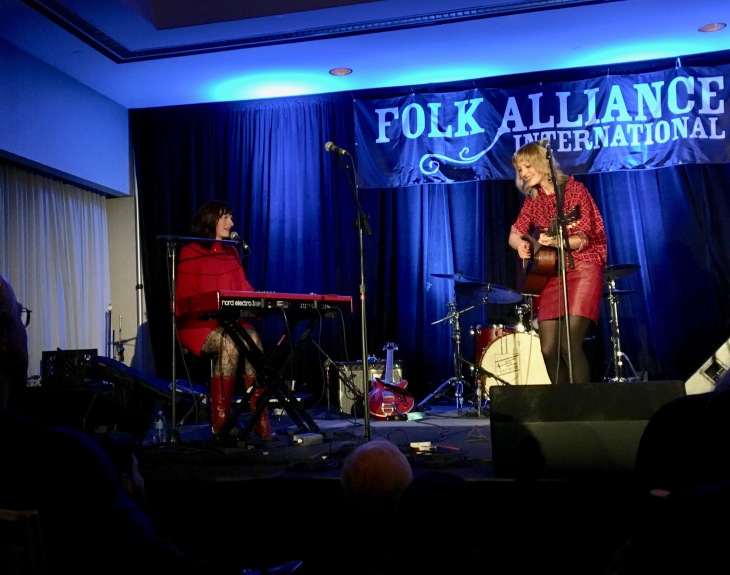 Anais Mitchell performs with Rachel Ries at the keyboard at Folk Alliance.  (Photo by Donna Trussell)

The political zeitgeist expressed itself early and often, most notably in the closing minutes of a standing-room-only showcase by Anais Mitchell, the exceptional songwriter whose mix of emotional vulnerability and steely determination has melded many a male and female admirer’s heart. Accompanied by her longtime friend and fellow singer/songwriter Rachel Ries (aka Her Crooked Heart) on keyboard as well as Brooklyn record producer Alec Spiegelman on bass clarinet, Mitchell turned to one of her most potent songs: “Why We Build the Wall.” It comes from “Hadestown,” Mitchell’s folk-opera retelling of the Orpheus-Eurydice myth. Hades, king of the underworld, performs a call-and-response with his people about what seems to be an eternal public works project meant to “keep out the enemy.”

As she introduced the tune, Mitchell allowed that some listeners might perceive certain parallels between Hades and the current occupant of the White House, even though she wrote the song years before a Trump presidency was conceivable to anyone except clairvoyants, comedians and schizophrenics.

“Not everything is about him,” she said.

Mitchell’s parable of state paranoia triggered a visceral reaction from a vocal audience. Elsewhere at the conference I saw a man carrying an enormous sign that read: “Trump That Boy Don’t Act Right” and met someone else wearing a button with the same slogan. Personally, I emerged from the exhibition hall wearing a “Woody Guthrie for President” lapel pin. That would be the same Woody Guthrie who wrote “This Machine Kills Fascists” on his guitar.

The night before Mitchell’s show, Spiegelman offered a tune of his own, “Kelly Anne,” an ode to White House flack Kellyanne Conway, the “Garden State blueberry princess” who learned to show her boss “that she could talk like a man.” “She knows the difference between a story that’s good for us and one that’s true,” Spiegelman sang.

Minutes later, impassioned songwriter Seth Bernard, who shared the time slot with Spiegelman, Ana Egge and Mark Lavengood, sacrificed his last chance to perform a song in order to voice a plea to the small audience. To paraphrase: Things get worse by inches until finally there’s a “paradigm shift.”  At that point people have had enough and band together to make a change. He urged all Americans to reject propaganda, accept the hard facts about the history of racism and genocide in this country and to be guided by love to make a healing contribution.

Canadians, who were well represented at the conference, are usually too polite to comment on American politics. But not always. At an afternoon showcase in the Breakout West Room, singer Adrian Glynn of The Fugitives introduced the band’s song “No Words,” a tribute to Leonard Cohen, by saying that when he heard the news that the great songwriter had passed, he was so shaken that he sat on his bed and stared at the wall for five hours.

“But that might have been the day Trump was elected,” he deadpanned. (Mr. Cohen died Nov. 7, 2016. Trump, perhaps supported by Russian bots and hackers, was elected the next day. I gather it’s not uncommon for people in shock to conflate tragedies.)

A late-night visit to the always-soulful Oklahoma Room offered a chance to hear Chris Lee Becker, a Tulsa songwriter I’ve admired since listening to him on a compilation CD three years ago. Becker, a blunt but consistently surprising lyricist who writes compassionately about people on the margins, has the look of a burly trucker.

He described his tune “Stigmata” as a song about misogyny, which he first performed at last year’s conference because Trump had been elected. “And why is he still there?” Becker said with a tone of simmering outrage.

Later in the set, Becker blanked on the lyrics to one of his songs and the music came to a temporary halt. “I’m sorry,” he said. “This shooting (in Parkland, Fla.) has really gotten to me.”

Ken Pomeroy, left, impressed listeners with the honesty of her lyrics. She performed in the Oklahoma Room at FAI18 in Kansas City. (Photo by Donna Trussell)

I discovered someone else in the Oklahoma Room: Ken Pomeroy, a young woman who sang with mournful eloquence of the folksinger’s life — and how itinerant artists can lean on each other if nobody else is available.

“Rolling chords and packing gear/All my folk friends got a friendly ear/
They’ve all got my back,” she sang in “Livin’ the Dream.” “They’ve got mine and I’ve got theirs/In this cruel world I know somebody cares.”
Indeed. Sometimes knowing somebody cares makes all the difference. 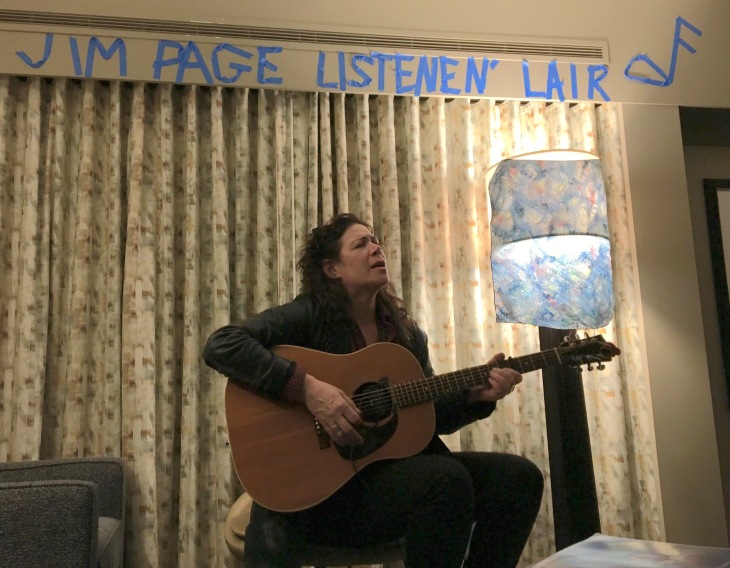 Her song questioned what Jesus would think if he could see the state of the world.

The excellent Swedish band Kolonien, which made its American debut at the conference,  had nothing to say about Trump but took time to explain the group’s political roots. In the beginning the band, comprised of two brothers, a cousin and a neighbor, focused exclusively on green politics. Message was more important than melody. Gradually Kolonien evolved to embrace a larger world view and a sophisticated musical vocabulary. 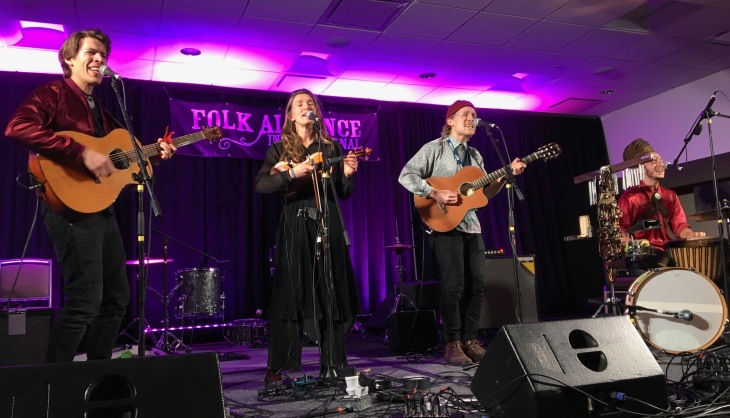 But in performance Kolonien dropped plenty of hints about their likely view of Trumpism.

“We start with a song about tearing down walls and building bridges,” they said to enthusiastic applause.

Guitarist Arvid Rask introduced a song he wrote about one of his forebears who emigrated from Sweden to the U.S at time when Sweden lost a third of its population. He dedicated the song “to the people from Sweden who traveled here for a better life. And to the people coming to Europe. And the people now coming from the south to your country.”

That triggered another wave of applause.

Rask and the other members of Kolonien spoke English well. But they, like so many of their fellow musicians at the conference, spoke protest even better.